Apprentice jockey Kayla Crowther has taken home the highest honour at this year’s Thoroughbred Racing South Australia Apprentice Academy Awards, winning the 2019 TAB Dux of the Academy award. In Crowther’s short time in the saddle, she has already won 189 races, with 32 winners for the 2018-19 racing season, and 63 for the Apprentice Academy year. Crowther also took home the SATA Most Winners in an Academy Year award for this total, as well as the SA Breeders award for Best Winning Strike Rate. The awards come on the back of a stellar year for Crowther, who was named Dux Runner-Up at last year’s awards behind Raquel Clark. She currently sits third on the South Australian jockeys’ premiership, behind Todd Pannell and Barend Vorster. Highlights of her strong performance this year include winning the listed ‘Hill Smith Stakes’ aboard Craftsmanship, and the $191K Magic Millions 2yo Classic aboard Done By Me on Adelaide Cup Day for which she also took home a Special Achievement Award.  As part of the award, Crowther will follow in the footsteps of previous winners and spend two weeks in Singapore next year where she will ride at the famous Kranji Racecourse. 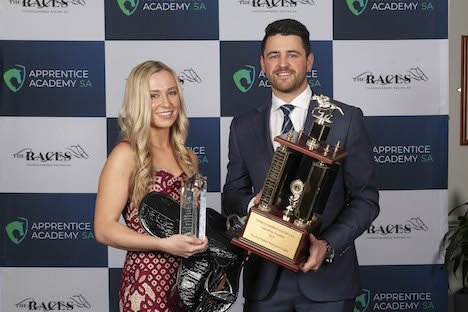