Saas Fee Breaks Through at The Farm

Valuable 3YO filly Saas Fee (All Too Hard-Snitzerland, by Snitzel) has broken her maiden with a narrow victory at Warwick Farm over 1300m in Sydney. The beautifully bred sophomore, trained by Gerald Ryan, was having just her second race start after placing as a 2YO at Hawkebsury back in June. By Vinery stallion All Too Hard, Saas Fee is a daughter of Snitzerland, who followed up an exceptional 2YO season that included a runner-up in the Gr1 Golden Slipper with victory in the Gr1 Lightning Stakes at Flemington as a 4YO mare. A multiple Group winner, who was also placed in the Gr1 The Galaxy, Snitzerland has recently been in the news with her latest 2YO Hard Landing – a full-brother to Saas Fee – winning the coveted Maribyrnong Plate (1000m) at Flemington. Raced by Werrett Bloodstock and Encompass Bloodstock, Saas Fee is named after a Swiss Alps ski resort that features up to 18 separate 4,000m peaks. 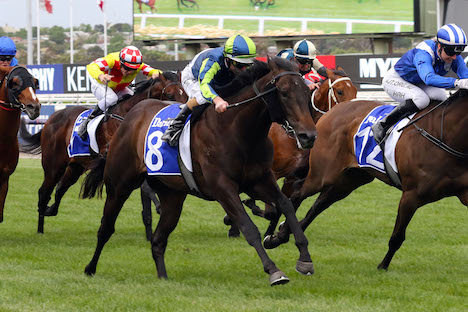