Cambridge trainer Andrew Campbell will head south with his two NZ Derby prospects to contest the Gr3 Lucia Valentina Wellington Stakes over 1600m, reports racingnews.co.nz. Peloton (Charm Spirit-Epicurean, by Flying Spur) is a winner from four starts, and ran second over a mile last start. The 3YO gelding will be ridden positively from gate eight on Friday. "He will go to the front, he'll lead them up and be pretty handy. He's fit and well and I couldn't be happier with him. He went a good race last start. It's just hard this time of year for 3YOs to compete against older horses at the weights, but I thought he went really well. He has had a brief let-up since then and his work has been super." Stablemate Tibetan (Shocking-Baltis, by Al Akbar) is still a maiden after two starts, but has showed enough at home to warrant the step up in class. "We galloped him with blinkers on yesterday (Tuesday) and he grew another leg, so that's the reason why we will go. With a bit of pace on and blinkers on, it will improve him a couple of lengths. He is probably the better chance I am picking. He has just been improving and improving," Campbell said. "Once we get him over ground I think we'll see a different horse, but that is why we have put the blinkers on, to sharpen him up over a mile and be competitive. I think he is the one to watch long-term, once we get over ground. It wouldn't surprise me if he goes a cheeky race on Friday with blinkers added for the first time. His work suggested he will be hard to beat." 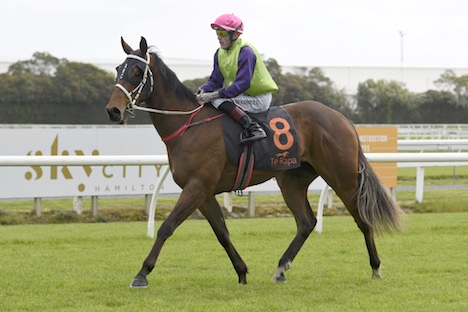 Peloton will run in the Wellington Stakes (pic: Trish Dunell)