It seems that owners Brent and Cherry Taylor aren’t able to do much wrong at the moment. The principals of Trelawney Stud recently watched their beautifully-bred Redoute's Choice filly Loire, a half-sister to Gr1 Queensland Oaks winner Vouvray, land the spoils in the Gr1 New Zealand 1000 Guineas. If success is infectuous, then their horses must know it as Trelawney’s equally well-pedigreed filly Zayydani maintained her unbeaten record when she scored over 1600m at Seymour on Sunday. The 3YO Savabeel filly is a half-sister to multiple Gr1 winner Grunt who now stands at Yulong in Australia. The duo’s dam is Van Nistelrooy mare Ruqqaya, the older half-sister of four-time Gr1 winner Ocean Park who stands at Waikato Stud and has enjoyed a purple patch of form with his progeny of late including the Gr1 Epsom Handicap (1600m) winner Kolding. No matter what the future on the track holds for Loire and Zayydani – herself a black-type prospect for Lindsay Park – there’s many a breeder that would give their right arm to have two such exciting breeding prospects to look forward to. 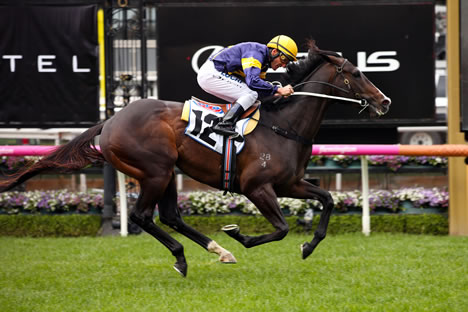 Undefeated Zayydani is a half-sister to Grunt (pic: Mark Gatt)