Exciting filly Euphoric Summer (Not a Single Doubt-Mid Summer Music, by Oamaru Force)burst into contention for January's $2 million The Star Gold Coast Magic Millions 2YO Classic after a thrilling win in Saturday's Clockwise Classic at Ballarat. In a driving finish, Euphoric Summer held out the favourite Rathlin and booked her place into the field for the $2 million Gold Coast feature on January 11. Euphoric Summer, who is raced by the international Phoenix Ladies Syndicate, had scored valuable black type on debut when she chased home Tanker for second in the Listed Debutant Stakes at Caulfield. Out of a Gr1 Stradbroke winner, she is trained by co-trainers Mick Price and Michael Kent Jnr, and was handled brilliantly by proven big race jockey Ben Melham. Kent enthused, "Hats off to the filly - she's tough. Rathlin was breathing down her neck and she kept sticking her nose out… She's a natural and all roads lead to (the Gold Coast) on January 11. She's got the talent but importantly for a two-year-old she's got the brain." A $260,000 Gold Coast Yearling Sale buy for her all female ownership group, Euphoric Summer is eligible for the $500,000 Magic Millions Racing Women's bonus. The Phoenix Ladies Syndicate outfit has successfully syndicated and raced horses with all female ownership around the world and today's star was one of two youngsters they purchased from the Gold Coast in 2019. The win provided a lovely pre-sale pedigree boost to the Fastnet Rock half-sister to Euphoric Summer who is heading to January's 2020 Gold Coast Yearling Sale. Catalogued as Lot 526, the bay filly will headline a cracking draft for Scone's Cressfield operation and she will go under the hammer during the early part of Day Three of the auction on January 10. 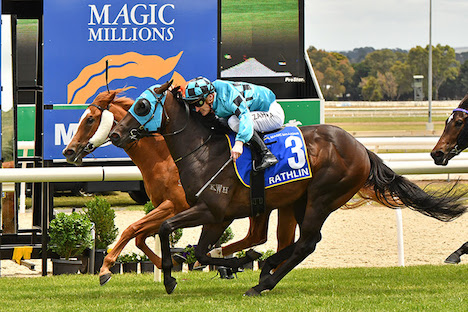 Summer Euphoria is covered up by favourite Rathlin (pic: magicmillions.com.au)