Near Perfect Start for Scissor Kick

Hasstobemagic gave Arrowfield’s first-crop sire Scissor Kick (Redoute’s Choice-Backpass, by Quest for Fame) a near-perfect start to his stud career when she finished a close second in Saturday’s Counties RC Challenge 2YO S. 1100m LR at Pukekohe in New Zealand. The strongly built chestnut filly made a good impression at her Otaki debut on 7 November when she was runner-up to the gelding Power ‘n’ Glory. Sixteen days later Hasstobemagic showed the benefit of that experience to settle just behind the early leaders, then track Unition into the straight before sprinting up to him for a spirited battle over the final 200 metres. On the line, the colt held a short neck margin on Hasstobemagic. The second foal of five-time winner Shanina (by Testa Rossa), Hasstobemagic was bred and offered by Fairdale Stud at the NZB Karaka Book 2 Sale. Well-known agent Robert Dawe bought her for $16,000 on behalf of New Plymouth owners Roger & Christine Hassall’s Family Trust and she is trained at Matamata by Roger James & Robert Wellwood. Roger James is famously patient with juveniles, but saw enough early to give Hasstobemagic her chance before Christmas, noting, “She’s very genuine, a lovely, balanced, no-fuss filly and she’s supremely athletic. She’s a doll and handles it all so well… She trotted up on the lead as if she was on springs. She is Karaka Million-nominated so all things being equal, I’ve got to give her the opportunity to go to that race.” Other trainers of Scissor Kick’s first-crop 2YOs include Gai Waterhouse & Adrian Bott, Peter & Paul Snowden, Paul Perry, Mathew Ellerton & Simon Zahra, Kim Waugh, John O’Shea and, of course, Paul Messara who prepared the striking son of Redoute’s Choice throughout his Group-winning career. Six fillies and two colts from Scissor Kick’s second crop will be offered by Arrowfield, Bhima Thoroughbreds & Edinburgh Park at the 2020 Magic Millions Gold Coast Sale. 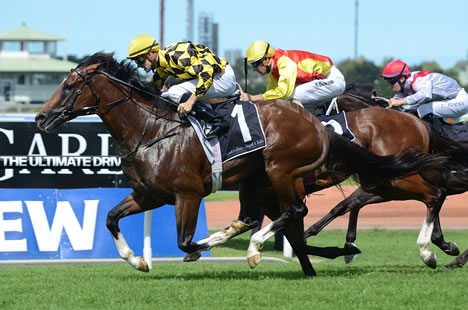