The influx to WA to contest Saturday's Gr1 Railway Stakes (1600m) at Ascot includes the Lindsey Smith-trained Reykjavic (Artie Schiller-Gibraltar Storm, by Rock Of Gibraltar), whose progress since his stylish last start victory in the Gr3 Chatham Stakes at Flemington on 9 November has encouraged the Warrnambool trainer to add him to the flight roster. "Reykjavik has thrived since Flemington and can run a big race on Saturday," Smith told The West Australian. "Dean [Yendall] will ride Reykjavik in the Railway. The horse shows peak form with Dean aboard." Reykjavic joined Smith's new recruit Tom Melbourne (Dylan Thomas) and Gr3 winner Pacodali (Paco Boy) on Monday night's flight, which also carried a further 9 racehorses. Update: racenet.com.au reports that the charter plane was cancelled last night due to a fuel leak. This evening, a new aircraft will transport the 18 horses that were forced to be restabled overnight. 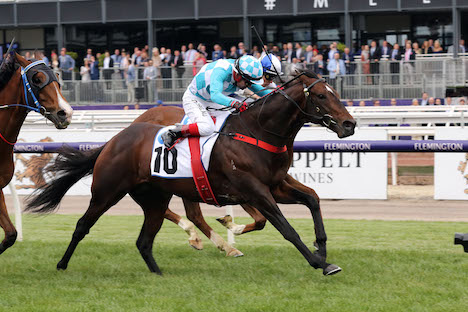