From Gr1 To Unique Staying Event

Shaune Ritchie is going from chasing Gr1 glory at Riccarton on Saturday to attempting to win the longest flat race. The Cambridge trainer was seeking his first Gr1 gavelhouse.com New Zealand 1000 Guineas (1600m) win and just came up short with Jennifer Eccles, finishing a long neck second to the Tony Pike-trained Loire, while his other representative, Belle Mente, finished fifth. Now, according to NZ Racing Desk, Ritchie is gearing up for a trip to Warrnambool next week to saddle up his stayer Where Are You in the $300,000 Jericho Cup (4600m) the following Sunday, on a  commemorative race day in honour of the ANZAC WWI heroes. Where Are You, part-owned by Ritchie, is heading to Australia in company with the Neil O'Dowd-trained Aigne, who earned an all-expenses paid trip for the Jericho Cup when winning over 3210m at New Plymouth on September 28 and beating Where Are You, who had also been runner-up in the same Taranaki event last year. The Jericho Cup was established to commemorate the centenary of a race run on the desert sands in Palestine in World War I and  is restricted to Australian and New Zealand-bred horses. The inaugural event was won last year by the New Zealand-bred High Mode. 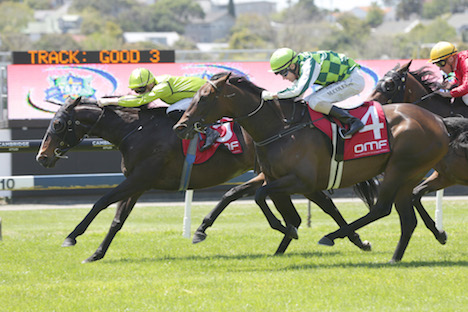 Where Are You (blinkers) will tackle 4600m (pic: Trish Dunell)