Inglis Easter Yearling Sale graduate Pretty Brazen (Brazen Beau) became the first filly in 14 years to eclipse the colts and geldings in the Gr2 Sandown Guineas (1600m). She was also one of four Inglis graduates to earn winning black type at the Melbourne track on its biggest day of the year. The well bred sophomore was offered at the 2018 Inglis Easter Sale by Coolmore Stud and purchased by McEvoy Mitchell Racing for $700,000 on behalf of Linda and Graham Huddy’s Peachester Lodge. “She was a big, beautiful, athletic filly at the sales and of course she already had a great pedigree,” a thrilled Linda Huddy said. “Even if she never made it to the track, she was always going to be worth a lot of money and she’s exactly what I went to the sale looking to buy. Pretty Brazen, one of 23 stakes-winning 3YOs in Australia so far this season that are graduates of Inglis auctions, was bred by Queensland-based Denis and Claire O’Brien. “I’m absolutely thrilled, particularly for Linda and Graham Huddy,” Denis O’Brien said. “$700,000 is a lot of money to pay for a yearling, but she was an outstanding sort and it is very rewarding to see her run up to the promise she has always shown.” He added, “It’s a huge credit to the team at Coolmore Stud, who did an exceptional job of raising her and I’m sure they’re excited to be offering her half-sister by American Pharoah – who is also stunning – at Easter next year. Pretty Brazen is the fifth Australian stakes-winner for her Darley Victoria-based sire Brazen Beau (I Am Invincible) and one of four stakes winners for her extraordinary dam Pretty Penny (Encosta de Lago). 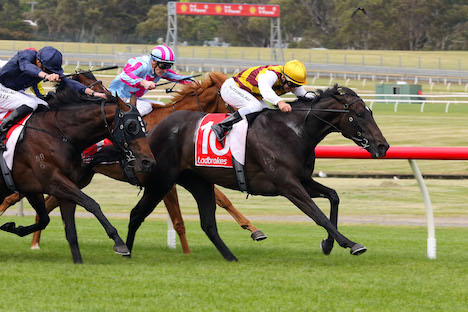