36 Gr1 Victories Each for Redoute's & Trelawney

Trelawney Stud’s Brent & Cherry Taylor supported Redoute’s Choice several times during his 19-year stud career and it says much about their faith in him, and his enduring class that their best result, as owners as well as breeders, arrived in his sixteenth crop. Their home-bred filly Loire prevailed in a high-pressure finish to win Saturday’s $300,000 CJC NZ One Thousand Guineas 1600m G1 at Riccarton Park, from Jennifer Eccles and the favourite Travelling Light. It was only the sixth start and the maiden stakes win for Loire, who is the fifth foal of Syrah (by Traditionally), the thirty-sixth Gr1 winner for her champion sire and, as Cherry Taylor notes, the thirty-sixth Gr1 winner from Trelawney in the Taylors’ ownership. “We loved Redoute’s Choice and thought he would make a super broodmare sire so tried to buy and breed as many as we could afford. We sent Syrah because we thought he was the best stallion in the Southern Hemisphere and wanted to breed to him, and she deserved to go to him being a half-sister to Gr1 winner Vouvray and the dam of Gr1 winner A Touch of Ruby.” Trelawney also bred Redoute’s Choice’s sixteenth Gr1 winner Allez Wonder (2009 MRC Toorak H. G1), bred & raced his stakes-winner Richie McHorse and, with Brent’s mother Faith, currently race multiple city winner Special Light. 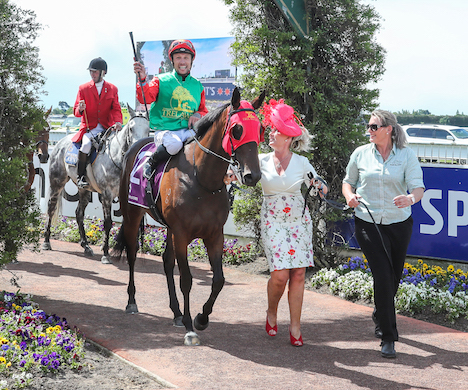