Pencarrow Stud and NZ Bloodstock principal Sir Peter Vela’s progressive mare Supera overcame a wide run in transit throughout to dominate her rivals in the closing stages of the Gr2 Gartshore Tauranga Stakes (1600m) on Saturday. According to NZ Racing Desk, The Ken and Bev Kelso-trained 5YO had looked a Gr1 winner in waiting last season as her mentors adopted a patient approach with her as she rose through the grades. Rounding off her 4YO season with a win at Gr2 level in the Travis Stakes (2000m) at Te Rapa following a narrow defeat in the Gr1 New Zealand Thoroughbred Breeders’ Stakes (1600m) at Te Aroha, Supera opened her latest campaign with a narrow defeat over 1400m at Ellerslie three weeks ago. Expected to improve significantly with the run, any predictions of a comfortable victory looked well off the mark in the early stages at Tauranga with rider Michael Coleman forced to sit three-wide at the rear of the eight horse field on the Savabeel even money favourite as The Mitigator and Consensus set up a solid speed out in front. Coleman edged his way forward approaching the home bend before asking Supera for a serious effort at the 300m. Supera hit full speed in three to four big bounds as she raced past The Mitigator to score with contemptuous ease by 2-lengths with Tiptronic narrowly shading Consensus for third. Kelso is confident the graddaughter of champion Ethereal has what it takes to snare Gr1 glory as he plots a path for her over the coming weeks. “All going well we will go to the Captain Cook (Gr1, 1600m) at Trentham and then get up over ground,” he said. “We’ll then go to Ellerslie for the Zabeel Classic (Gr1, 2000m). 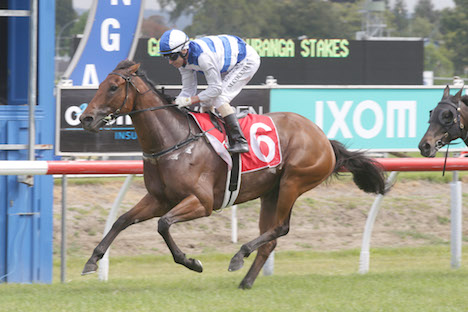