Multiple New Zealand Gr1 winner Madison County will continue his career in North America with trainer Chad Brown as he plays a trail-blazing role for his owners. The China Horse Club-owned gelding has won four of his 14 career starts, with a further six placings, and was New Zealand’s Champion 3YO on the back of Gr1 victories in the New Zealand 2000 Guineas (1600m) and the Levin Classic (1600m), while he was also runner-up in the Gr1 Australian Derby (2400m). The 4YO son of Pins failed to show his best in three runs in Melbourne this spring for champion Kiwi trainers Murray Baker and Andrew Forsman, but was a victim of wide barriers and was beaten less than five lengths on all three occasions.  “We just felt it was an opportunity to try something and the fact that he is a gelding allowed us to do that a lot more freely,” China Horse Club’s racing and bloodstock manager Michael Wallace said. “As we go down the road, there is opportunity to move horses from jurisdiction to jurisdiction and it is something that we’ve never done or a lot of people have never done. We felt that there was a potential opportunity for him to race very well all-year-around in a pretty open turf division in America.” Purchased by Wallace for just $36,000 at New Zealand Bloodstock’s National Yearling Sales from the draft of leading nursery Waikato Stud, the astute judge believes Madison County possesses the right attributes for American racing. He will head to the stables of leading turf trainer Chad Brown. “The quarantine is actually very simple,” revealed Wallace. “It is only 48 hours on arrival into the States.” 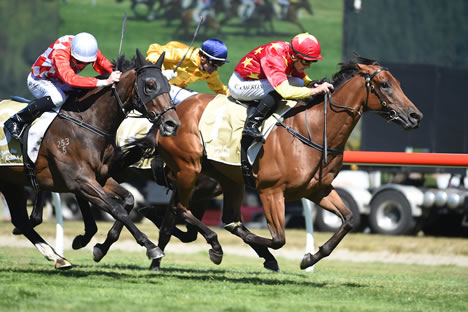