Chipperfield Likely To Retain Star 3YO

Talented 3YO galloper Catalyst is set to remain in the care of Te Awamutu trainer Clayton Chipperfield after his victory in the Gr1 New Zealand 2000 Guineas (1600m) at Riccarton on Saturday. With Australian targets forthcoming, speculation was rife that Catalyst would be transferred to an Australian trainer. However, The Oaks Stud’s General Manager Rick Williams was quick to quash those rumours and said it was his intention for Chipperfield to retain the exciting gelding. Catalyst, who carries the white and blue colours of The Oaks Stud principal Dick Karreman, has dominated his age group this spring. He opened up his three-year-old account with an eye-catching four-length victory in the Listed Sir Colin Meads Trophy (1200m) at Hastings in August before winning three Group races on-end, culminating in Saturday’s heroics. Williams has been full of praise for Chipperfield and the way he has managed Catalyst. Karreman and Williams are now eyeing an Australian autumn campaign with Catalyst, and while they have received a number of offers from Australian trainers, Williams said he would like Chipperfield to remain the custodian of the talented sophomore. “My preference will be to leave him with Clayton. Dick and I haven’t discussed it, all we have discussed is that we are going to find a programme in Australia. “I have had a lot of offers from Australian trainers, but it’s not what I have done in the past, and not the sort of person I am. He has done a great job.” 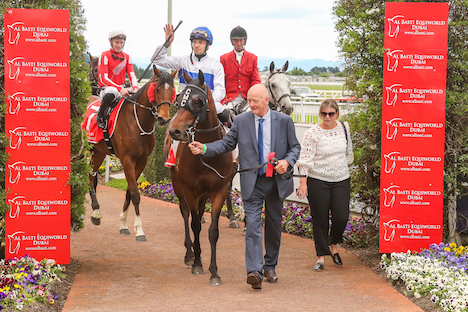