Asterix Daughter Has The Magic Potion

Ubiquitously successful owner Neil Werrett is seldom far from the headlines, and his name was in lights again when blue-blooded Akari (Snitzel-Asterix, by Neo Universe) won Tuesday’s final stakes race on Melbourne Cup Day with a fiercely determined finish. There were shades of another Arrowfield graduate daughter of Snitzel carrying Werrett’s silks in the dramatic charge for victory in the $175,000 VRC Desirable S. 1400m LR. That was Snitzerland who made a remarkable 2YO debut at Flemington on Cup day eight years ago and very nearly won the VRC Ottawa S. LR. She went on to build a stellar $1.9 million career, winning the VRC Lightning S. G1 and five other Group races. Akari was bred by Arrowfield’s highly successful partnership with Katsumi Yoshida’s Northern Farm and she has a pedigree of global significance as the daughter of a three-time Champion Sire and Asterix (by Neo Universe) whose first Japanese-born foal Aerolithe is a Gr1-winning miler, rated behind only Almond Eye, Lys Gracieux & Vivlos among 4YO+ mares in Japan. This is also the family of Champion Sprinter-Miler Mikki Isle, whose first Australian yearlings sell this season. Akari was purchased for $1.05 million from Arrowfield’s Inglis Easter consignment by Jadeskye Racing, her trainer Brad Widdup & Andrew Williams Bloodstock, with Neil Werrett subsequently  joining the ownership. Asterix produced a second Snitzel filly at Arrowfield last year before returning to Japan. 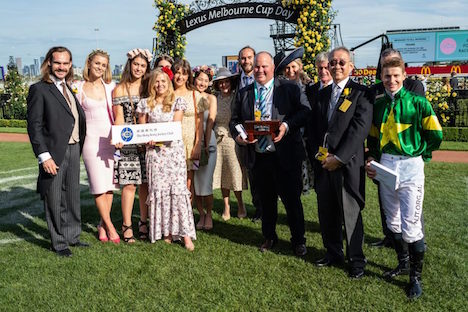