For Kitchwin Hills’ stud manager Mick Malone, yesterday’s result capped off what has been a phenomenal spring carnival which has also netted wins in The Everest and Redzel Stakes for horses carrying the Kitchwin Hills brand. “This is the race that stops the nation and we’re just doing our best up here in the Hills and we’ve won the Melbourne Cup! It’s unreal,’’ Malone said.“This horse (Vow and Declare) was born, raised and offered at Kitchwin. Wow. I want to give a huge wrap to Sheamus Mills, he played a massive role in this result and he deserves so much credit for this. To Paul Lanskey, what a great bloke, they don’t come much better. “And to my staff, this is a huge result for the farm. They get up at all hours of the morning every day of the year and do all the hard work and to sit together here at the farm and watch one of our horses win a Melbourne Cup, knock me down, I’m speechless.’’ Malone revealed, “Shannon Betts of Emeran Park who broke Vow And Declare in and pre-trained him, she rang me one day during that process and said he’s the nicest horse she’s ever broken in in her life,'' Malone said. “I guess she’s a pretty handy judge too!’’ 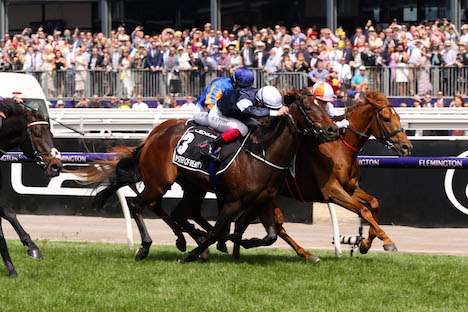