The devastating win by the Chris Waller trained Kolding (Ocean Park-Magic Star, by Danzero) in the $7.5 million Golden Eagle (1500m) at Rosehill on Saturday was a considerable triumph for New Zealand's Wentwood Grange Stud, despite their name being omitted from the breeders page. A long-standing partnership between the stud and retired Australian businessman and former professional rugby league player Warren Pegg was the official affiliation that produced the outstanding gelding, as Wentwood Grange Marketing Manager Sean Hawkins told the NZ Racing Desk. "Kolding is actually a product of that partnership, although there was a bit of a muck up with the paperwork when it was submitted as he is noted as being bred solely by Warren…Given our wonderful relationship with Warren, it's not something we are too concerned about and it's just fantastic to see another graduate from the stud doing so well." Offered through Wentwood's 2017 New Zealand Bloodstock Yearling Sale draft, Kolding was purchased by Guy Mulcaster for $170,000 on behalf of owner Neville Morgan, and was the first Gr1 winner for Waikato Stud stallion Ocean Park. To conclude their already successful weekend, the stud also produced the dam of Saturday's Gr1 Coolmore Stud Stakes (1200m) winner Exceedance (Exceed and Excel-Bonnie Mac, by Thorn Park) – see below. 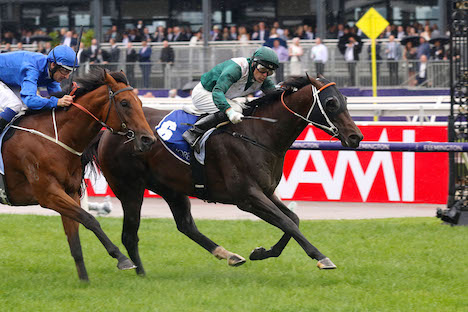