George Altomonte Has Another Standout

Corumbene Stud’s principal George Altomonte, whose Snitzel three-quarter blood-brother to gifted sprinter Menari fetched $2.8 million at the 2019 Inglis Easter Yearling Sale, is no stranger to success on the track. Amongst a litany of Gr1 stars, a majority of them leading 2YOs and 3YOs either sold and/or raced by Altomonte, one of his highlights would have to be Gr1 Golden Slipper winner Overeach, an Exceed and Excel filly out of Bahia, a half-sister to Gr1 Blue Diamond Stakes winner Reward for Effort. Repeating the mating, Altomonte experienced the frustration and disappointment of seeing Overreach’s full-brother Underreach finish runner-up in the Gr3 Canonbury Stakes on debut – alas, never to race again. Undeterred, the owner-breeder ventured once more to the well, and the outcome is undefeated 3YO Exceed and Excel colt Standout who made it a hattrick last Saturday with a stylish win in the Listed Heritage Stakes at Rosehill Gardens. Mid-field in the run, he popped off the fence stylishly to work between horses and challenge favoured Cosmic Force. An exciting work in progress for Altomonte and trainer Gerald Ryan, Standout won't be out of place in Group company. Bahia missed to Exceed and Excel in 2017, but had another colt by him in 2018. Meanwhile, Altomonte also owns the trio's city-winning full-sister Marishka, served by Gr1 Golden Slipper winner Vancouver in late 2018. 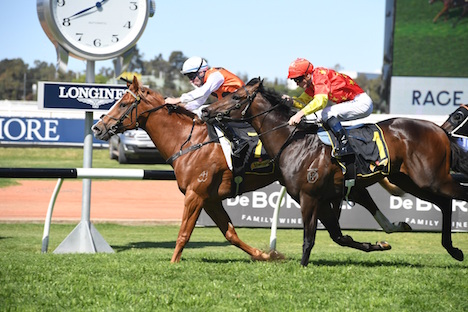