A 'head cold' slowed the return to the track for Gr1 Doncaster Mile winner Brutal (O'Reilly-Alberton Princess, by Golan), but co-trainer Michael Hawkes has entered the entire into a trial on Friday, reports racingnsw.com.au. "He did a nice piece of work and he's all systems go for Friday,'' Hawkes said. "We'll see him step out and more than likely, provided he trials well and everything is good, he'll be first-up in the Premiere. He's ticking over nicely, it's a long spring. It's exciting times, the races on offer are there and that's what we are looking at. I'm looking forward to it, he's a really nice horse and he's maturing lovely.'' On the back of his Doncaster win Brutal was installed an early favourite with TAB to take out the inaugural Golden Eagle. Given he's been out of sight until now he's slipped to third elect $6 behind two horses who are likely to attempt the TAB Everest-Eagle double in Arcadia Queen ($3.00) and Classique Legend ($4.50). The plan was always to race Brutal as a 4YO. "It depends on each individual horse but a horse like Brutal hopefully has a lot more to give even though he's only had seven starts and has already won a Doncaster. These horses aren't mature yet, you don't get to see the best of them. That was why going back to the Octagonal and Lonhro days Jack and Bob (Ingham) wanted to race their horses on because they were passionate about racing," reflected Hawkes. "Unfortunately the dollar kicks in from the stud value and we don't get to see the best of these colts and that's why the Winxs and Black Caviars and those mares kept racing on. It's a funny thing this sport, you've got to treat it as it is and go for the ride when you can." Brutal has won 4 of his 7 starts and is a full-brother to stakes winner Talaria. 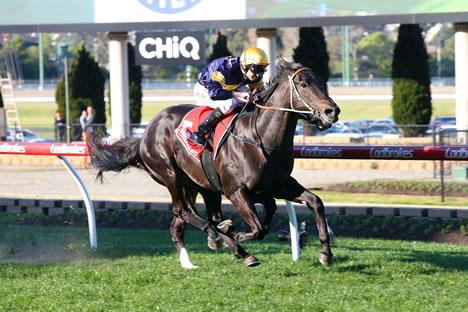 Brutal is the forgotten horse of the Spring (pic: Mark Gatt)