Into Mischief Fully Booked for 2020

The current No. 1 General Sire in North America, Into Mischief (Harlan’s Holiday-Leslie’s Lady, by Tricky Creek), will stand in 2020 for a fee of $175,000 S&N and has been booked full. According to Ted Noffey, general manager at Spendthrift where the blue-blood stands, “The rise of Into Mischief has been special to witness, and there’s every indication that the best is yet to come. We genuinely believe he’s the best sire in the world, and is on the verge of becoming an important sire of sires when you look at what Goldencents is doing.” Into Mischief ranks as the leading sire in the land in 2019, with US$12,779,193 in progeny earnings – more than a million ahead of No. 2 Tapit – through Saturday, according to BloodHorse. Into Mischief has sired industry highs in black type horses with 45 and Gr1 horses with 8 to date in 2019, led by his newest Gr1 winners Mia Mischief and Covfefe. In the sales ring, Into Mischief had an industry-high four 2YOs sell for seven figures in 2019, led by a US$1,800,000 filly at the Fasig-Tipton Timonium sale in May – breaking a record for the highest-priced horse ever sold publicly in Maryland. He also sired the $1,300,000 sale topper at OBS April and $900,000 sale topper at OBS June this year, giving him an industry-high four 2YO sale toppers in the last two years. A US Gr1 winner, Into Mischief is a half-sibling to multiple champion Beholder, young Gr1-winning sire Mendelssohn and Keeneland’s sale-topping US$8.2 million 2019 September Sale yearling. 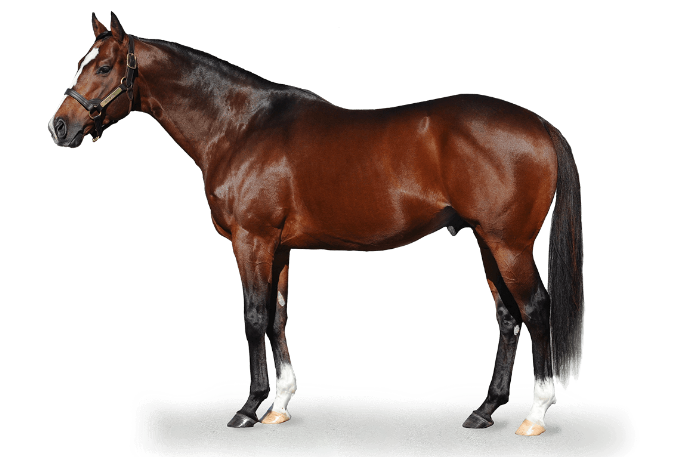 Leading US sire Into Mischief is fully booked (pic: spendthriftfarm.com)