Boom kiwi 3YO gelding Catalyst (Darci Brahma-Evana, by Enrepreneur) has confirmed he is the real deal, treating rivals with contempt when producing a devastating home straight sprint to capture the G.3 Cambridge Stud Northland Breeders' Stakes (1200m) at Ruakaka. The Darci Brahma gelding overcame some trouble early in the run home to dash clear in the closing stages of the contest, winning with consummate ease by over 2.5-lengths from pacemaker Exuberant, with local galloper Zelenski back in third. Successful in the Listed El Roca-Sir Colin Meads Trophy (1200m) at his last start after settling on the speed and then dashing away at the top of the Hastings home straight, this time Catalyst had to prove his worth after being ridden in behind by regular pilot Troy Harris. "It makes the job easy with a guy like him," Harris said. "I ended up in a good spot but straightening I had to make the choice whether to kick up or pull back. Once I got out it was all over." Harris was effusive in his praise: "He could be the best horse I have ever ridden."Raced by owner-breeder The Oaks Stud's principal Dick Karreman, Catalyst will now head to the Gr2 Sacred Falls Hawke's Bay Guineas (1400m) at Hastings and then the Gr1 Al Basti Equiworld New Zealand 2000 Guineas (1600m) at Riccarton, after that plan was confirmed by rookie trainer Clayton Chipperfield. 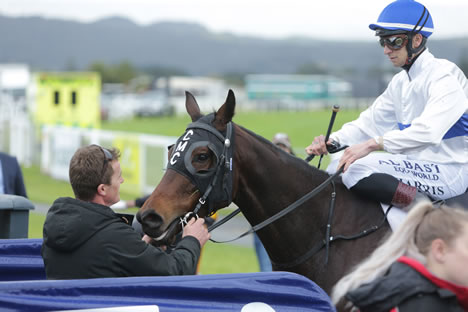