Big Week No Shock For Thompson

Rich Hill Stud principal John Thompson is a happy man following a wonderful week for his resident stallion Shocking (Street Cry). According to NZ Racing Desk, a brace of Australian victories on Saturday capped off a seven-day stretch that saw the dual Gr1-winning son of Street Cry produce eight individual winners throughout Australia, New Zealand and Macau. Amongst those successes was impressive Rosehill winner Shock Alert for former kiwi trainer Bjorn Baker, while promising three-year-old Zelenski added a black-type placing to his record at just his fourth start when finishing third behind Catalyst in the Gr3 Cambridge Stud Northland Breeders' Stakes (1200m) at Ruakaka. Thompson is delighted with the success for Shocking who he believes has become one of the forgotten sires in the local market, despite fashioning an impressive record since he commenced duties at Rich Hill eight years ago and had four stakes-winners in his first crop. "The number of mares he has been getting has dropped away as it tends to do with a number of stallions but with the backing of a good syndicate of owners behind him, he has still managed to maintain a steady stream of winners," said Thompson. "At a fee of $8,500 this season I think his record shows he is tremendous value as a proven producer that the market may have forgotten a little." 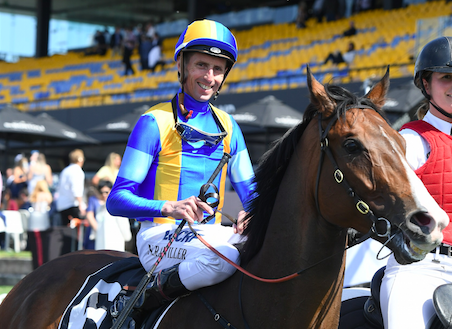 Shock Alert was one of 8 winners by Shocking for the week (pic: Steve Hart)