9-Length Stakes Winner A First For His Breeders

New Zealand breeders Philly and Paddy Mullin consider themselves new to the breeding game, and are absolutely delighted to have bred their first stakes-winner Cooga Doon. While that would apply to any breeder, it's ultra rare for any stakes race to have a 9-lengths winning margin, something the 3YO son of Westbury Stud stallion Makfi managed in the recent Listed HS Dyke Wanganui Guineas (1350m) at just his second start, putting 13-lengths between himself and the third place-getter. According to the NZTBA, Cooga Doon was purchased privately by Gavin O'Dea, after he failed to reach his reserve at the 2018 NZB Karaka Yearling Sale, and he placed him in the care of Fraser Auret. He is the second foal from the O'Reilly mare Monachee, who the Mullins purchased as a yearling. "I was looking for an O'Reilly mare and went through the pedigrees and she popped up in my scope," reveals Paddy Mullin. "I liked the look of her, and I got Allan Sharrock to look at her as well and he bought her for me for $135,000 from Avondale Stud." The subsequent 7-time winner, whose victories included the Listed Dunedin Gold Cup (2400m) where, like Cooga Doon, she spaced her rivals by panels. Mullins is a keen pedigree student and says, "A wise man once told me an ounce of blood is worth a ton of bone, so I have followed that advice." It seems to be working pretty well thus far. 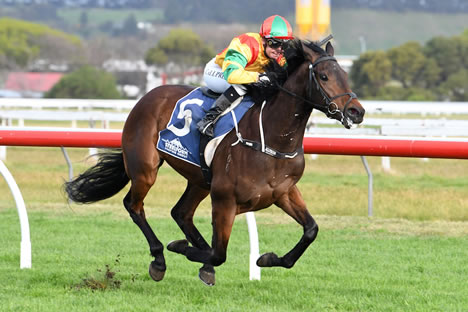