Trainer James Cummings is heading into Saturday’s Gr1 Makybe Dica Stakes filled with confidence about the prospects of stable senior Hartnell. Providing his thoughts on the ever-consistent 9YO gelding’s chances against an exciting field that includes exceptional Tasmanian mare Mystic Journey, Godolphin’s Cummings said, “Hartnell has kept on thriving since his meritorious effort in G1 Memsie second-up last start. In his past two preparations he’s found his best form at his third run back. He won the Epsom third-up last spring and he finished second in the All Star Mile at the same stage of his autumn campaign. And he’s training like his third run is going to be his best this time.” With fighting talk, Cummings claimed, “The gladiator is ready to throw down the gauntlet again at Flemington which should suit him perfectly third-up from a spell… He’s going beautifully.” Hartnell is a $12 quote in early markets. 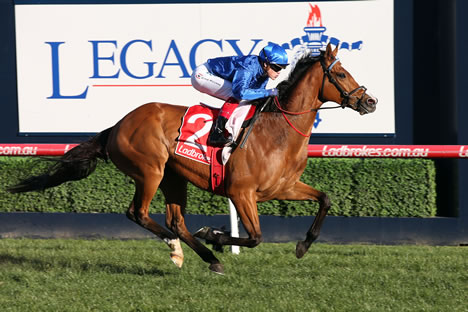