An innovative move by the Victoria Racing Club (VRC) will see the 2019 Kennedy Oaks Day at Flemington pushed back to become a twilight meeting with a later finish than usual. On Wednesday morning, racing.com reported that the Kennedy Oaks meeting won’t start until nearly 2pm, with a 6.25pm finish expected for the nine race program. The compressed meeting will see shorter breaks between events. The traditional Ladies Day extravaganza would see the $1 million Kennedy Oaks (2500m) run just before 6pm. Book-ending the occasion, there will be a lawn luncheon followed by headline acts in The Park precinct at the conclusion of the day’s racing. The VRC’s CEO Neil Wilson noted, "Kennedy Oaks Day is immensely popular every year and the club believes providing a dedicated lunch period and a later start to the race program is the logical step forward to further enhance the success of the day while broadening the appeal to a new audience.” He pointed out, "The updated program of events will also make it easier for those with work commitments to take a half-day or finish work and get to the track to enjoy the vibrant atmosphere and first-class racing that the VRC's Melbourne Cup Carnival is known for." Last year's race was won by First Light Racing's 3YO filly Aristia. 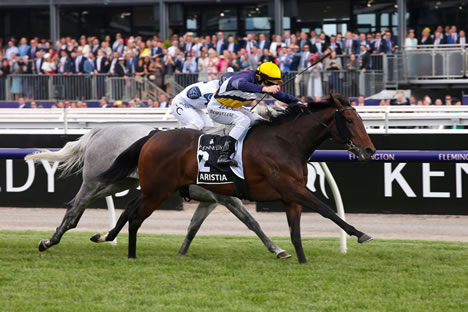