Blue Breeze (Bullbars-Peony Rose, by St Reims) will kick of his spring campaign in the Listed Wyong Gold Cup over 2100m on Friday, and his trainer Allan Morley told NZ Racing Desk, "We thought right, let's have a go. If you don't go you won't know. I am a bit of a fatalist like that. I think if I have done everything right, fed them well and shod them well, and I have done everything I can, what will be will be." The 6YO gelding ran third in the Gr1 Auckland Cup over 3200m last autumn and Morely said, "Since the Auckland Cup in March he has grown almost an inch and he's nearly 20 kilos heavier, he is only a little guy. He is holding his condition a lot better than he used to as well. He seems to like his races about two weeks apart. If our mountain is the Melbourne Cup we needed to do two weeks apart from where we are to then." Morley mapped out the plan for Blue Breeze, "Wyong is the first one, then two weeks later the Newcastle Cup (Gr.3, 2300m) and then two weeks later The Metropolitan (Gr.1, 2400m). If he qualified for the Melbourne Cup then you have got the St Leger (2600m) two weeks later in Sydney and then two weeks to the Melbourne Cup." Morley has a showjumping background, and is a blacksmith and saddler by trade. He took over his father's breaking in business, and a few clients asked him to train a few and that's how he ended up with Blue Breeze. "I was asked to break him in and take him to the ready-to-run sale. I said to the owner I would break him in, but we won't get him to the ready-to-run sale because he is too far behind the eight-ball," he said. "We just played with him from then on. He got bigger and stronger all the time and we gave him a trial and he looked good. He didn't race until he was four, maybe that was a good thing in the long run." 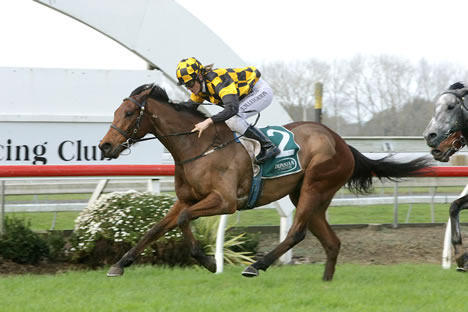