Maastricht, the dam of star 2YO Loving Gaby, became the fourth-highest priced mare ever sold through an Inglis sale ring during a spectacular night of action at The Chairman’s Sale on Friday evening. Coolmore and James Bester Bloodstock won the bidding battle at $2,250,000 for the grey mare, who was offered by Newgate Consignment for owners Alan Bell and Ananda Krishnan, carrying an I Am Invincible full-sibling to Loving Gaby. The evening at Riverside Stables was responsible for a number of high profile sales including four mares that fetched $1 million or more, two of which fell to Coolmore for a combined $4,250,000, both of who will be served by their US Triple Crown-winning stallion Justify. The second was dual Gr1 winner Srikandi (in-foal to US Triple Crown-winning American Pharoah) whose I Am Invincible weanling sold for $650,000 last Thursday. 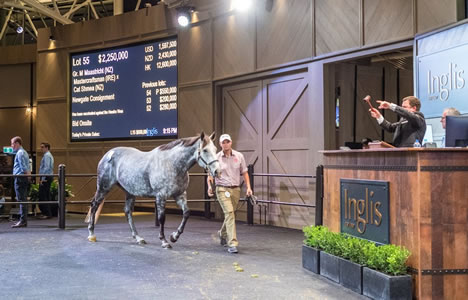