At Hastings in New Zealand, Waikato Stud's Cox Plate-winning multiple champion sire Savabeel (Zabeel-Savannah Success, by Success Express) added a Group race success when 3YO filly Queen of Diamonds (Savabeel-Love Diamonds, by Danehill) scored by 1.5-lengths for trainers Murray Baker & Andrew Forsman in the $100,000 Gr2 Little Avondale Lowland Stakes (2100m) for 3YO fillies, defeating fellow fillies Shezathinka & NZB Filly of the Year leader Imelda Mary. Prominent from the start, where she sat just off the leader, beautifully-bred Queen of Diamonds responded well whe asked to extend in the straight, comfortably taking the first prize. Forsman was delighted with the ride by Matthew Cameron, but equally taken by the run. “The key was she didn’t have blinkers today and while she did work early, she wasn’t fizzed up doing it. She just relaxed nicely enough, got a little bit of cover down the back and that helped and she just tracked into it beautifully.” A $650,000 yearling consigned by Cambridge Stud and purchased by China Horse Club at the 2017 NZB National Yearling Sales Series, Queen of Diamonds’ victory pushed her close to leading the NZ Filly of the Year table. Now with 3 wins (including the Gr3 Eulogy Stakes) and 3 placings (including the Gr2 Eight Carat Classic & Gr2 Sir Tristram Fillies Classic) from 8 starts, Queen of Diamonds, who was fourth in the Karaka Million 3YO Classic, improved her career earnings to $163,175. 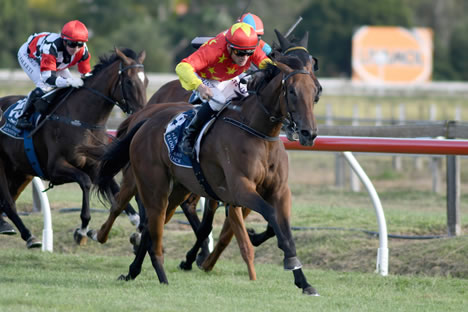