Goulburn trainer Kurt Goldman will be braced with a $50,000 credit at today’s inaugural Highway Session (Classic Book 2) after Safe Landing won Wednesday’s Country Highway at Warwick Farm. Under the conditions of the race, any Inglis graduate paid up for the Race Series that went on to win the feature would earn their trainer a $50,000 Highway Session credit. Goldman was the lucky recipient as Safe Landing – a $130,000 buy for him at the 2016 Classic Yearling Sale from the Fairview Park Stud draft – nosed out fellow Inglis graduate Professor Marx. “We’ve always had a really nice opinion of this horse, from the moment we saw him at the Classic Sale back at Newmarket,” Goldman said. “As soon as Inglis announced this great incentive I decided to set Safe Landing for the race, knowing he would qualify for the cheque if he was good enough to win…" Goldman added, “I’d like to thank Inglis for creating such a quality initiative to help support the country and provincial trainers and hopefully I can pick up a nice horse from the Highway Session.” Today’s Highway Session begins at Riverside Stables from 10am. 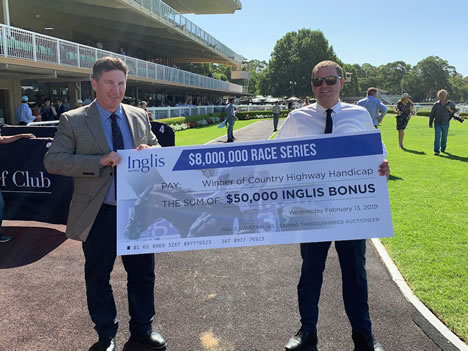