Following the recent announcement that Winx's half-brother Boulder City would be calling Victoria’s Riverbank Farm home, Caulfield Guineas winner Anacheeva will also stand at the Benalla property this spring. Despite his excellent racing and pedigree credentials, Anacheeva has never served large books of mares but owner Geoff Guest maintains the faith and is hopeful that a new home will see the ten-year-old afforded better opportunities. “He has shown that with the right mare he can produce a good horse," Guest said, pointing to his own success with home-bred Ana Royale, winner of the Gr3 SA Fillies Classic and two times Gr1-placed in the Australasian Oaks at Morphettville and the Queensland Derby at Doomben. Winner of one of Victoria's premier stallion making races, Anacheeva has his name on the Caulfield Guineas honour roll alongside the likes of Starspangledbanner, Lonhro, Show A Heart, Redoute's Choice, Grosvenor, Sovereign Red, Luskin Star, Vain, Ajax and Heroic. He is one of 88 stakes-winners sired by the outstanding Danzig stallion Anabaa. "Anacheeva is a nice addition to complement our existing stallion roster as he brings the bloodlines of Anabaa and hails from a superior family," said Riverbank Farm principal Dr Caroline Duddy, adding that "at a reduced service fee of $,3300 he provides great value for the owner breeder." 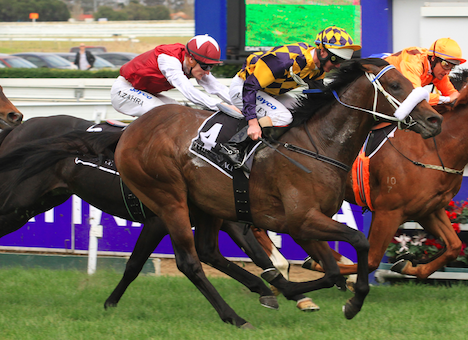