At Flemington racecourse in Melbourne, Widden Stud's dual Gr1-winning sire Nicconi (Bianconi-Nicola Lass, by Scenic) added a stakes race success when boom 3YO Australian-bred gelding Nature Strip (Nicconi-Strikeline, by Desert Sun) opened his stakes account with another impressive display of speed in the $120,000 A.R. Creswick Series Final (1200m) for 3YO+, defeating Order Of Command & Egyptian Bullet. Passed in for $90,000 at the 2016 Melbourne Premier Yearling Sale when offered by his breeder Golden Grove Stud, Nature Strip improved his record to 6 wins and 2 placings from 9 starts for $499,800 in earnings. Trainer Darren Weir said he will now sit down and plan a spring program for Nature Strip that he hopes will culminate in $13 million The Everest (1200m) at Royal Randwick on 13 October. "He'll come on from that, because he had a good gallop today. He had to go late to make him go, whereas last start he cruised through the line. He can only win so he's done a great job, so look forward to the future," Weir told racing.com. "I think everyone is pretty keen to get him into The Everest," he added. "Hopefully there's some slot-holders interested in taking him on. If that doesn't happen, we'll map out a plan to the spring." 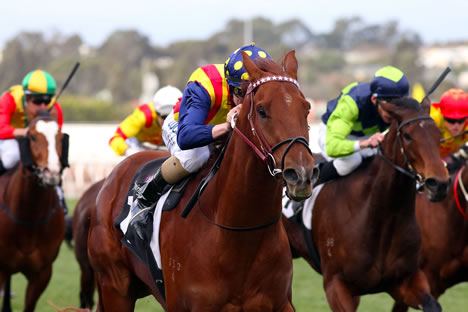