Gr1 3YO to Chase Rich Bonus

Capital Gain is likely to pursue Queensland's lucrative Summer Crown bonus if he can resume with a win in the Winning Rupert Plate (1200m) at Doomben on Saturday. The Paul Butterworth-trained 3YO, who has not raced since capturing the Gr1 JJ Atkins Stakes at Doomben in the winter, will be eligible for a $500,000 bonus if he can win three races in the five-race series. The Winning Rupert and the Mode Plate, which will also be run on Saturday, comprise the first legs of the five-race Three-Year-Old Summer Crown series. The remaining series races are the Listed Gold Edition Plate at Doomben on 16 December, the Gr3 Vo Rogue Plate at Doomben on 30 December, and the Magic Millions 3YO Guineas at the Gold Coast on 13 January. "The original plan was to run on Saturday, miss the Gold Edition and then run in the Vo Rogue Plate and Magic Millions Guineas," Butterworth told Racing Queensland. "But if he happens to win the Winning Rupert he'll go for the Gold Edition as well and go after the bonus." Capital Gain has been in work for several months and ran fourth in a barrier trial at Doomben a fortnight ago. "It's 1200 metres on Saturday and that's not his pet distance but he's jumping out of his skin," Butterworth said. "If he gets clear running he'll be hard to hold off." Butterworth said if he performs well during the summer, Capital Gain (Ad Valorem-Zuzao, by Delzao) could be freshened for the Gr1 Rosehill and Randwick Guineas and the Australian Derby in the autumn. 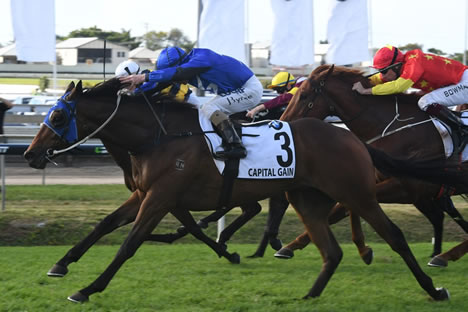