Meanwhile, in a major prelude to next Tuesday's Gr1 Melbourne Cup at Flemington, high profile jockey Damien Oliver has lost his appeal against a suspension that has ruled him out of riding favourite, and last year's winner, Almandin in the big race. Overnight, ABC News reported that Oliver will have to serve his 20 racemeeting suspension meted out following last Saturday's historic Gr1 Cox Plate won by Winx. Stewards found Oliver guilty of improper riding after alleging he hampered subsequent fourth-placed Royal Symphony during the Moonee Valley feature in which he rode Happy Clapper. Oliver's failed appeal has resulted in leviathan owner Lloyd Williams turning to Frankie Dettori, a more than capable replacement albeit he is yet to win the two mile event since his first attempt 24 years ago. 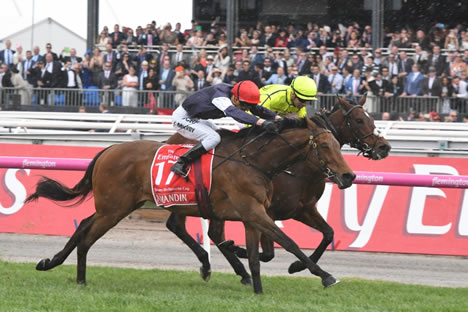 Almandin will be ridden by Frankie Detorri (pic: Steve Hart)