At Moonee Valley in Melbourne, Darley's former Champion Australian Sire & 11-time Gr1-winning World Champion Miler Lonhro (Octagonal-Shadea, by Straight Strike) added a Group race success when 3YO bay filly Banish (Lonhro-Meidung, by Bernardini) sustained a long run to loop the field and run away for a stylish win in the $200,000 Gr2 Fillies Classic (1600m) for 3YO fillies, defeating I'll Have A Bit & Touch Of Mink. This was the maiden stakes victory for Banish who improved her record to 4 wins and 3 placings from 8 starts for $195,950 in earnings. A homebred for Darley and Godolphin, Banish is out of the stakes-winning Bernardini mare Meidung and hails from the family of multiple Group winner Pinwheel and Gr2 Stan Fox Stakes winner West Point. 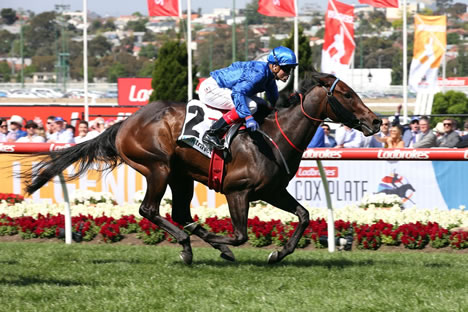