At Moonee Valley in Melbourne, Brighthill Farm's ill-fated shuttler and multiple Gr1 winner Azamour (Night Shift-Asmara, by Lear Fan) added a Group race success when richly talented 3YO bay filly Aloisia (Azamour-Queen Boudicca, by Perfectly Ready) let rip with an explosive turn of foot to score a brilliant win in the $200,000 Gr2 Moonee Valley Vase (2040m) for 3YOs, defeating Cliff's Edge & Salsamor. An equally impressive winner of the Gr1 Thousand Guineas (1600m) at her previous outing, Aloisia is now a dominant $1.70 favourite for next week's VRC Oaks at Flemington. Sporting the familiar white, blue and gold hooped livery of OTI Racing, Aloisia improved her record to 3 wins (including the Gr1 Thousand Guineas) and 2 placings (including the Gr1 JJ Atkins Stakes) from 7 starts for $612,567 in earnings. "It's very exciting to have a little filly like this. She really does look the goods," OTI's managing director Terry Henderson told racing.com. Trainer Aaron Purcell said the race would top Aloisia off perfectly for the Oaks. "She is a horse who was always going to be better at 2000 metres and beyond and she showed what a class filly she is," Purcell said. "The Oaks has always been her goal and she is right on track." The $1 million VRC Oaks (2500m) for 3YO fillies will be run at Flemington on 9 November. 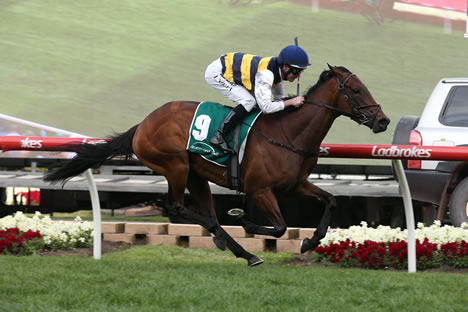