Arrowfield Stud has announced that former champion filly Alinghi has died while foaling. Unfortunately, her Not A Single Doubt foal also died. "It's a sad day for all of us, losing Alinghi and her foal, she was a magnificent racehorse and after more than eleven years with us at Arrowfield, very much part of all our lives," said Arrowfield Chairman John Messara. "We're immensely grateful for the joy she gave us, co-owners John Leaver & Alan Jones, her breeders, trainers, original owners and many others, and for her contribution as a broodmare." Mr Messara added: "She has also left us five daughters, four of them already breeding for us, and a gorgeous yearling filly by Deep Impact we'll now keep." Part owned by Messara, Alinghi (Encosta de Lago - Oceanfast, by Monde Bleu) was an outstanding filly who won 11 of her 18 starts for over $3.5 million in prize money. Crowned Champion Australian 3YO Filly of 2004-2005, her career highlights included four Group One victories, namely the Blue Diamond Stakes, Thousand Guineas, Swettenham Stud Stakes (now the Robert Sangster Stakes) and Newmarket Handicap, where she defeated none other than Fastnet Rock down the famous Flemington straight. Alinghi also campaigned in the US where she claimed the Gr3 Ballston Spa Handicap at Saratoga at her penultimate start, before bowing out unplaced behind Host in the Gr1 Keeneland Turf Mile. 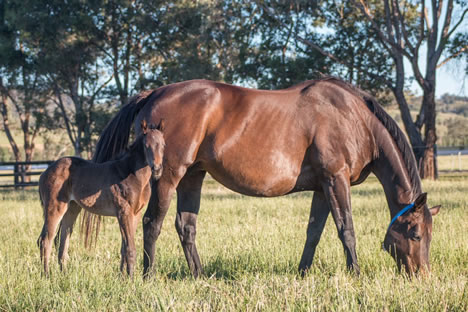