At Caulfield racecourse in Melbourne, Coolmore's Triple Crown winning Champion 2YO Pierro (Lonhro-Miss Right Note, by Daylami) added a Group race success when beautifully bred 3YO bay filly Pinot (Pierro-Dizelle, by Zabeel) opened her stakes account with an impressive front-running win in the $150,000 Gr3 New Zealand Bloodstock Ethereal Stakes (2000m) for 3YO fillies, defeating Rimraam & Hiyaam. Purchased by Eclipse Thoroughbreds for $200,000 at the 2016 Inglis Australian Easter Yearling Sale from the draft of Coolmore Stud, Pinot improved her record to 2 wins and 2 placings from 5 starts for $128,275 in earnings. Pinot, who is being aimed at the VRC Oaks, is out of Australian Oaks winner Dizelle, herself a full sister to champion Hong Kong galloper and 6-time Gr1 winner Vengeance of Rain. "When she came down from Sydney I was determined to win the VRC Oaks, it's the one thing I want to do," co-trainer Gai Waterhouse told racing.com. "I sent a couple of fillies down and she was beaten at her first start but every time since she's kept on improving." The $1 million Gr1 VRC Oaks (2500m) will be run at Flemington on 9 November. 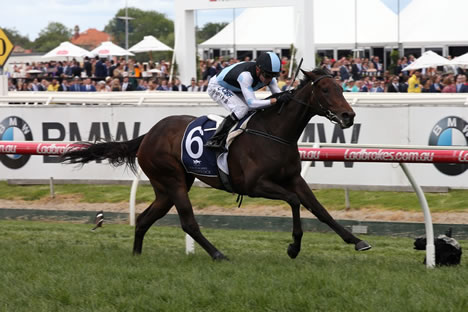