At Caulfield racecourse in Melbourne, Widden Stud's dual Gr1-winning stallion Star Witness (Starcraft-Leone Chiara, by Lion Hunter) added a Group race success when 4YO brown filly Global Glamour (Star Witness-Spectacula, by Testa Rossa) overcame a wide barrier to resume with a strong win in the $200,000 Gr2 Tristarc Stakes (1400m) for 4YO+ mares, defeating Cool Passion & Shillelagh. Global Glamour, who was a $65,000 purchase by James Bester on behalf of the It's All About The Girls Syndicate at the 2015 Magic Millions Gold Coast Yearling Sale, improved her record to 5 wins (including the Gr1 Thousand Guineas, Gr1 Flight Stakes & Gr2 Light Fingers Stakes) and 4 placings (including the Gr2 Arrowfield 3YO Sprint Stakes & Gr2 Furious Stakes) from 12 starts for $1,389,000 in earnings. Co-trainer Gai Waterhouse said Global Glamour's primary spring target is the $500,000 Gr1 Myer Classic (1600m) at Flemington on 4 November. She then indicated that long-term, an international campaign could be on the cards. "She came down to run in the Myer," Waterhouse told racing.com. "She will only have one or two more runs then she will be freshened up for the Magic Millions, and then hopefully we may take her overseas." When asked what international plans she had in mind, Waterhouse nominated Royal Ascot as a potential target. 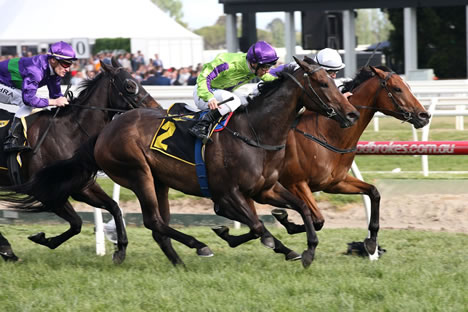