At Caulfield racecourse in Melbourne, Arrowfield Stud's retired former Champion Australian Sire Flying Spur (Danehill-Rolls, by Mr Prospector) celebrated an elite race success when 6YO bay entire Boom Time (Flying Spur-Bit Of A Ride, by Snippets) landed the biggest prize of his career with an upset win in the $3 million Gr1 Caulfield Cup (2400m) for 3YO+, defeating Single Gaze & Johannes Vermeer. Boom Time's surprise victory improved his record to 7 wins (including the Listed Mornington Cup Prelude) and 9 placings (including the Gr1 ATC Western Australian Derby, Gr3 JRA Cup & Listed JC Roberts Stakes) from 32 starts for $2,459,025 in earnings. The former WA-trained Boom Time was originally retained to race by his breeder after he was passed in for $65,000 at the 2013 Magic Millions Perth Yearling Sale, but is now owned by his co-trainer David Hayes. Hayes, who has now trained three Caulfield Cup winners following Fraar in 1993 and Tawqeet in 2006, said Boom Time benefited from a tough run the previous week in the Gr2 Herbert Power Stakes (2400m). "What a great horse. He's tough and backed up off that gut-buster last week and I think that probably won him the race, the good hard run under his belt," Hayes told racing.com. "It was very much like Fraar's win. Fraar had the hard gut-buster the week before, ate up and thrived. It can ruin a horse and it can make a horse." Boom Time will now head to the $6 million Gr1 Melbourne Cup (3200m) at Flemington on Tuesday, 7 November. 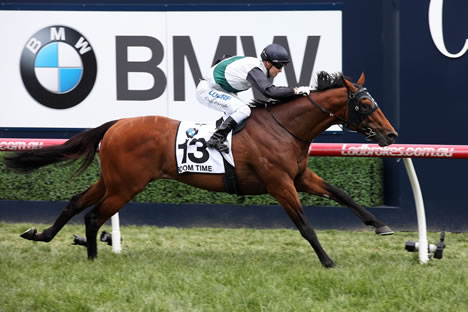