Lane Has Faith in Humidor

Jockey Damian Lane believes Humidor (Teofilo-Zalika, by Zabeel) can provide him with the biggest win of his career in tomorrow's Gr1 Caulfield Cup (2400m), reports Sky Racing. Lane knows the Darren Weir-trained Humidor well having partnered him to Gr1 glory in the Makybe Diva Stakes (1600m) two starts ago. He says the 5YOs performance when 3rd [beaten 7 lengths] behind Winx in the Gr1 Turnbull Stakes was better than it looked and that he is now ready to step out over more ground. "When Winx let go he was left out of his comfort zone and from where he was I thought he probably ran the best as he could," Lane said. "I thought he closed the race off well and ran like a horse probably looking for the 2400 metres." Lane continued: "He's come through his Turnbull run really well and he's drawn a good gate [7] which always helps. I'm very excited. The Caulfield Cup is the Caulfield Cup. There's a lot of great chances…but if he gets the right run I'm sure he can run really well." Humidor is currently the $8 second favourite for the Caulfield Cup behind the Aidan O'Brien-trained Johannes Vermeer at $4.20. 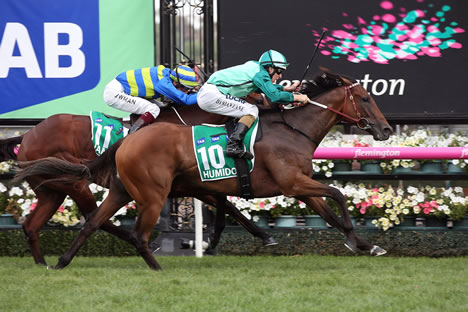