At Caulfield racecourse in Melbourne, 6YO entire Tosen Stardom (Deep Impact-Admire Kirameki, by End Sweep) became the first Australian Group One winner for his superstar Japanese sire Deep Impact when scoring a powerful win in the $500,000 Gr1 Toorak Handicap (1600m) for 3YO+, defeating Sovereign Nation & Petrology. This was a thoroughly deserved maiden Gr1 success for Tosen Stardom who had placed three times previously at the elite level. The Darren Weir-trainee improved his record to 6 wins (including the Gr3 Hanshin Challenge Cup) and 4 placings (including the Gr1 Memsie Stakes, Gr1 Futurity Stakes & Gr1 Ranvet Stakes) from 23 starts for $2,135,607 in earnings. A delighted Darren Weir said the victory now meant Tosen Stardom possessed all the attributes to become a great stallion at the end of his racing career. "It's such a relief because this horse has everything it takes to be one of the great stallions," Weir told racing.com. "He's got the pedigree, the ability and now he's got his Group One." Weir said he would consider running Tosen Stardom in the Gr1 Cox Plate (2040m) at Moonee Valley on Saturday week. "It's either the Cox Plate or the Cantala next for this horse," he said. 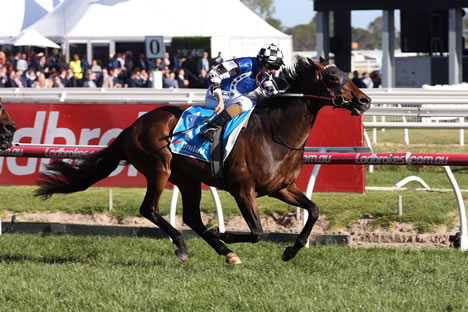