The Peter and Paul Snowden-trained Redzel (Snitzel-Millrich, by Rubiton) sent his career earnings soaring when winning the inaugural running of the $10 million The Everest (1200m) at Royal Randwick on Saturday. The son of Arrowfield's incumbent champion Australian sire Snitzel collected the winner's cheque of $5.8 million for the world's richest turf race to boost his prize money tally to $7,195,250. Redzel benefited from an adroit ride by jockey Kerrin McEvoy to sprint clear at the top of the straight and score a comfortable 0.8 length win over Vega Magic with Japanese-bred sprinter Brave Smash holding on for third. Supporters of runner-up Vega Magic can count themselves a little unlucky after the Lindsay Park-trained speedster was caught wide for the entire race. "What a race to win," McEvoy told Sky Racing. "It is so exciting. It's such a thrill to be part of it. Such a huge buzz…He's [Redzel] a little star." Co-trainer Peter Snowden described winning The Everest as one of the highlights of his illustrious training career. "I can't talk," Snowden told racenet. "I've never experienced anything like this." He added: "Our first Golden Slipper was exceptional, I didn't think I'd ever get that feeling again but today is well past it." Redzel improved his record to 10 wins (including the Gr1 Doomben 10,000, Gr3 Concorde Stakes, Gr3 Hall Mark Stakes, Gr3 Heath Stakes & Listed Fireball Stakes) and 5 placings (including the Gr1 ATC Galaxy Handicap, Gr2 Shorts, Gr2 ATC Challenge Stakes & Gr3 ATC Kindergarten Stakes) from 20 starts for $7,195,250 in earnings. Redzel, who is out of Gr3 Sweet Embrace Stakes winner & Golden Slipper placegetter Millrich, was a $120,000 purchase by Triple Crown Syndications at the 2014 Magic Millions Gold Coast Yearling Sale from the draft of Marquee Stud. Remarkably, Redzel's Everest win has practically guaranteed his sire Snitzel of yet another Australian Champion Sire title with his progeny earnings surging past $10 million. 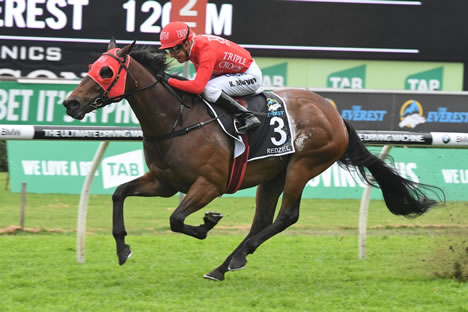