At Royal Randwick in Sydney, former stakes-winning Darley stallion Time Thief (Redoute's Choice-Procrastinate, by Jade Hunter) added a black-type success when 5YO bay mare In Her Time (Time Thief-Hell It's Hot, by Zeditave) continued on her winning way when proving too classy for her rivals in the $500,000 Listed Sydney Stakes (1200m) for 3YO+, defeating Impending & Ball Of Muscle. In Her Time, who was passed-in for $38,000 by Kanangra at the 2014 Inglis Classic Sale, improved her record to 7 wins (including the Gr2 Premiere Stakes, Gr2 Millie Fox Stakes & Gr2 Breeders Classic) and 3 placing from 16 starts for $1,301,725 in earnings. Trainer Benjamin Smith said In Her Time would now travel south to compete at the spring carnival in Melbourne. 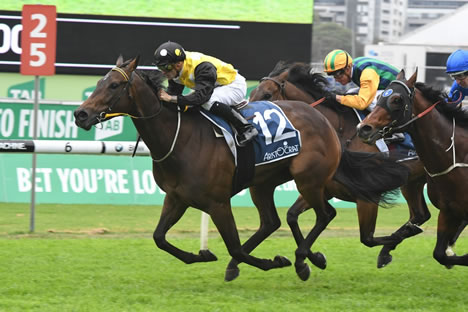 In Her Time (image: Steve Hart)