At Caulfield racecourse in Melbourne, Brighthill Farm's ill-fated shuttler and multiple Gr1 winner Azamour (Night Shift-Asmara, by Lear Fan) celebrated an elite race success when 3YO bay filly Aloisia (Azamour-Queen Boudicca, by Perfectly Ready) showed why she has always been held in the highest of regard when unleashing an impressive turn of foot to land the $500,000 Gr1 Thousand Guineas (1600m) for 3YO fillies, defeating fellow fillies Shoals & race favourite Alizee. Sporting the familiar white, blue and gold hooped livery of OTI Racing, the richly talented Aloisia improved her record to 2 wins and 2 placings (including the Gr1 JJ Atkins Stakes) from 5 starts for $487,567 in earnings. This was a bonus win for Aloisia whose primary spring target is the $1 million VRC Oaks (2500m) at Flemington on 9 November. 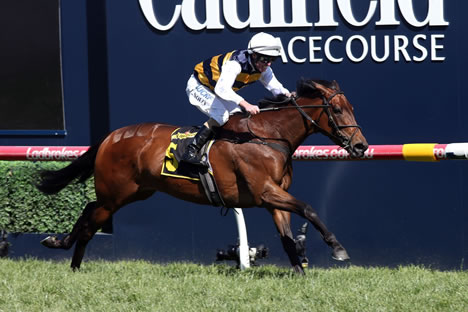