The Murray Baker and Andrew Forsman-trained Bonneval goes into Saturday's $1 million Gr1 Caulfield Stakes (2000m) in Melbourne in a rich vein of form, reports NZ Racing Desk. The reigning New Zealand Horse of the Year, who has emerged as the best Kiwi mare since Caulfield & Melbourne Cups winning heroine Ethereal, has hitherto won 7 of her 10 career starts, including three Group One victories in her current winning sequence of six. "She just keeps winning and winning good races. People love a horse that keeps raising the bar and winning impressively," Forsman said. Bonneval, who is currently the $3 TAB favourite for the Caulfield Stakes ahead of Hartnell at $3.10, will use the race as her final preparatory run for the $3.15 million Gr1 Caulfield Cup (2400m) on 21 October. "She's going really well and she's just about to let go of the last bit of her winter coat so she's looking good at the right time," Forsman continued. "She's shaping like she's looking for a staying trip, looking for further than the 2000m on Saturday, but there's no doubt she's got the class to win." Bonneval Makfi-Imposingly, by Zabeel) will be reunited with Melbourne jockey Damian Lane who rode her to victory in the Gr2 Feehan Stakes two starts back. 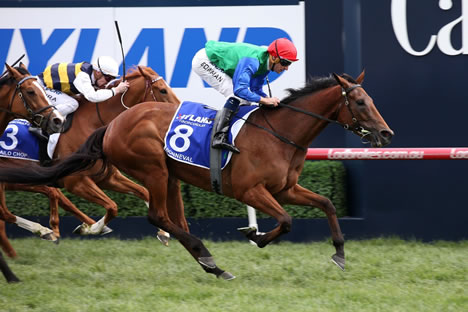