She Will Reign Draws Perfectly for Everest

She Will Reign will be given every chance of adding The Everest to her list of accomplishments after drawing perfectly in barrier two for the world's richest turf race at Randwick on Saturday. Trainer Gary Portelli said he was delighted with the starting gate for the star filly, adding she's had the ideal preparation for the race. She Will Reign (Manhattan Rain-Courgette, by Charge Forward) claimed outright favouritism for the $10 million Everest after she resumed with a stunning last-to-first win in the Gr1 Moir Stakes (1000m) at Moonee Valley on 29 September. "It's great. It's the short way home isn't it," Portelli told Sky Racing after yesterday's barrier draw. "After she won the Golden Slipper we targeted this race. She's had a fantastic preparation and I can't believe the way she won the other night." He added: "She's bounced very back quickly and her work this morning was exactly what we wanted to see. It was sharp and she's ready." She Will Reign will represent slot holder Yu Long Investments in The Everest. 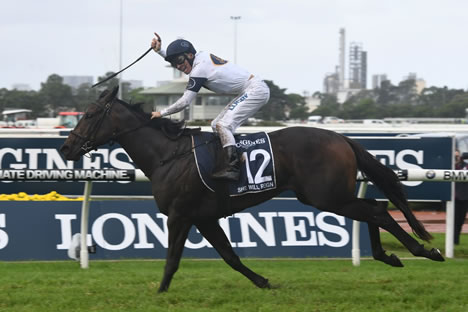 She Will Reign (image: Steve Hart)