The world’s highest price for a yearling in 2017 was set on the opening day of Book 1 of the Tattersalls October Yearling Sale yesterday when a colt by Dubawi was knocked down to trainer Roger Varian on behalf of Sheikh Mohammed Obaid for 2.6 million guineas. Consigned by Meon Valley, the colt is out of the dual Gr1-winning mare Izzi Top (Pivotal) and is a direct descendant of outstanding producer Reprocolor, one of the foundation mares of the Weinfeld family's Meon Valley Stud in England. This is the family of European Classic winners Cezanne, Colorspin, Kayf Tara, Opera House, Zee Zee Top, and Gr1 Prix de l'Opera runner-up Jazzi Top. "He has been bought for Sheikh Mohammed Obaid, owner of Dubawi and a keen supporter of the sire's stock," said Varian. "There are some very nice Dubawis here and this horse is very nice, a strong horse and a stand-out so early in the sale. He looks as though he will carry a bit of speed." The opening day’s trade saw 119 lots sell for a gross of 33,880,000 guineas, at an average of 284,706 guineas and a median of 200,000 guineas. Turnover was up 8% compared with the opening session last year, whilst the average and median rose 24% and 38% respectively. 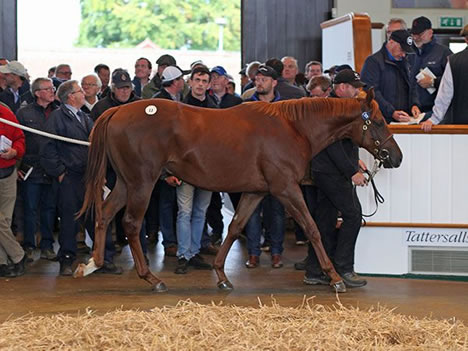