At Moonee Valley in Melbourne, Arrowfield Stud's Gr1-winning stallion Manhattan Rain (Encosta de Lago- Shantha's Choice, by Canny Lad) celebrated an elite race success when star 3YO filly She Will Reign (Manhattan Rain-Courgette, by Charge Forward) resumed with a stunning late surge to win the $500,000 Gr1 Moir Stakes (1000m) for 3YO+, defeating Viddora & Sheidel. A $20,000 bargain purchase by Darby Racing at the 2016 Inglis Classic Yearling Sale, She Will Reign advanced her remarkable record to 5 wins (including the Gr1 Golden Slipper, Gr2 Silver Slipper Stakes & Listed (R) Inglis Nursery) and 1 placing (including the Gr2 Silver Slipper Stakes) from 6 starts for $2,859,150 in earnings. Benefitting from the 50kg she was asked to carry under the weight-for-age scale, She Will Reign's winning prospects looked forlorn entering the straight before she unleashed a tremendous burst of speed to get up and beat Viddora right on the line. She Will Reign will now head to the $10 million The Everest (1200m) at Royal Randwick on 14 October. "We were hopeful she was the real deal, and she's proved it tonight - that was an amazing run," trainer Gary Portelli told racing.com. "I didn't think she'd won, but she knows how to win. Another Group One, the Everest is going to be a lovely race in a fortnight's time." 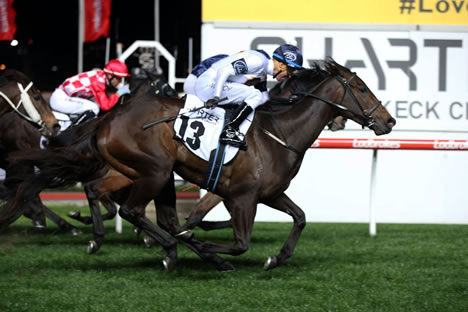 She Will Reign (image: Mark Gatt)