Chautauqua Set to Fire on All Cylinders

Brenton Avdulla is confident star sprinter Chautauqua (Encosta de Lago-Lovely Jubly, by Lion Hunter) can win Saturday's Gr2 Premiere Stakes (1200m) at Randwick en route to his primary spring target, the $10 million The Everest on 14 October. Avdulla had his first ride aboard the world's best sprinter when he resumed with a slashing effort in the Gr2 The Shorts (1100m) at Randwick twelve days ago. The mighty grey was run off his feet early and was a conspicuous last turning for home before unleashing his trademark electric turn of foot to finish a close-up 7th (beaten 2.2 lengths) behind the Team Snowden-trained Redzel. The merit of Chautauqua's performance was underscored by the winner's sizzling race record time of 1:01.83 with a final 600m sectional of 32.84 seconds. "He gives you a false sense in his trials. He doesn't break any records so you're not 100 per cent sure but I was always promised that when I let him go race day and the cylinders fired up that he'd let rip, which he did," Avdulla told racingnsw.com.au. "We're two weeks away from the main race [The Everest] but he couldn't have been more impressive first-up. With good horses a lot can happen one prep to another and you wonder if they have come back or not." Avdulla added: "I saw him work Tuesday morning and he looks terrific. I'm sure he is going to improve again off Saturday but it is going to take a good one to beat him." 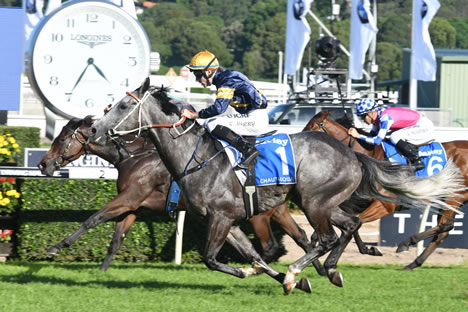