At Rosehill Gardens in Sydney, Arrowfield Stud's incumbent Champion Australian Sire Snitzel (Redoute's Choice-Snippets' Lass, by Snippets) celebrated an elite race success when 3YO brown colt Trapeze Artist (Snitzel-Treppes, by Domesday) scored an upset win at odds of 40-1 when powering clear at the top of the straight for a dominant win in the $1 million Gr1 Golden Rose (1400m) for 3YOs, defeating Champagne Cuddles & Menari. Trainer Gerald Ryan said Trapeze Artist could back up in Saturday's Gr1 Epsom Handicap (1600m) at Randwick where he will carry just 48kg. "I wasn't surprised. I have been saying for two weeks this horse has been flying under the radar," Ryan said. "He was aimed at this race and he's done the job today." Ryan said Trapeze Artist would now be aimed at the the stallion-making Gr1 Coolmore Stud Stakes (1200m) at Flemington on 4 November. Hot favourite Menari was galloped on and lost a plate but Ryan refused to use that as an excuse for the colt's defeat. Trapeze Artist improved his record to 3 wins (including the Gr3 Black Opal Stakes) and 1 placing (the Gr1 Inglis Sires' Produce Stakes) from 8 starts for $957,750 in earnings. Hailing from the female family of Gr1 winners Crawl and Boardwalk Angel, Trapeze Artist was passed in for $250,000 at the 2016 Inglis Australian Easter Yearling Sale from the draft of Vieira Group. His record now reads 2 wins from 3 starts for $195,200 earnings. Interestingly, Trapeze Artist also traces his female line back to New Zealand mare Entreaty, the dam of legendary racehorse Phar Lap. 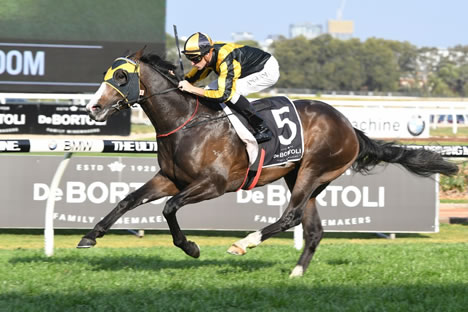