Dual Group One winner Gingernuts (Iffraaj-Double Elle, by Generous) is expected to appreciate the step up to a mile in Saturday's Gr1 Windsor Park Plate at Hastings, reports theinformant.co.nz. Last season's New Zealand Derby and Rosehill Guineas overcame difficulties in running when resuming with a strong finishing fifth in the Gr1 Tarzino Trophy (1400m) on 2 September. Co-trainer Jamie Richards says he expects a bold showing from the 4YO who is the equal $4.50 favourite alongside Kawi for the second leg of the Hawke's Bay Triple Crown series. "You could say he was a little bit stiff [first-up]," Richards said. "He got into some trouble at the top of the straight and was knocked off balance…his final furlong was very strong." Richards added: "He's come through the race very well and we're happy with his progress…stepping up to 1600 metres on Saturday will be ideal for him." Gingernuts' primary spring target is the $3.15 million Gr1 Caulfield Cup (2400m) in Melbourne on 21 October for which he has been allocated 55kg. 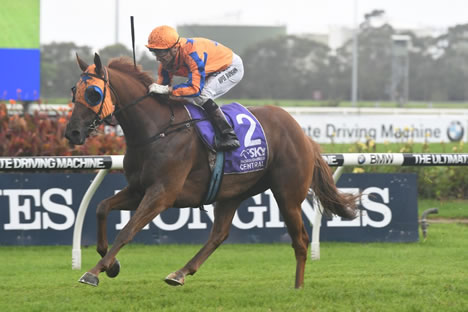